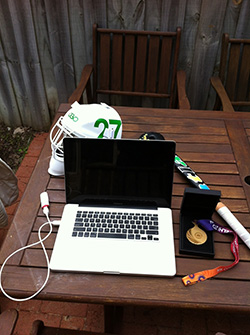 One of the privileges that comes along with being a Hockeyroo is getting the opportunity to meet and chat with young fans. I was recently given the chance to be involved in the Australian Olympic Committee’s program called “Chat to a Champ”. This program provides students with direct communication to athletes in the lead up to and during the largest sporting event in the world, the Olympics.

At 7.30am Perth time I linked up with Merimbula Primary School through Skype where over 100 kids were sitting together ready for a chat. It was fantastic to be able to see all the kids there enthusiastically waiting for their turn to ask a question. I was pretty nervous to start off with as I had never done this before but once we got going and the kids started asking some questions we were right. There were a wide variety of questions about hockey, when I started, what our training involves and some about playing sport in general. One that did get the kids going was “What footy team do you go for”. Im a proud Bombers supporter in the AFl but don’t follow the Rugby league or union like many of the kids did. The state of Origin had been on the night before so they were disappointed to hear that I didn’t follow NSW. The chat was a lot of fun and I was sorry I couldn’t stay on for longer. Next was Glen William Primary School, a small school from country NSW. This was a more intimate group with less than 20 kids. These kids had sure done some research and all had excellent questions. I couldn’t see the whole class this time but it sounded like they were very well behaved 🙂

I really enjoyed chatting with all the kids from both schools. It is still a real honour for me to do things like this and the novelty never wears off, I can assure you. Thanks to the AOC for making it happen and to both schools for spending the morning with me. Have a read below of some of the very kind feedback.

The kids and other teachers were all really pleased with it and it has been a great starter for a bunch of other follow up activities for our stage. Thank Rachael again for us, she did a great job and the kids are now all keen to write her an email and hit her with a bunch of other questions.
Craig – Merimbula

“Today I enjoyed our video conference with Rachael Lynch, the goal keeper for the Austrailan Hockey Team. She is a very inspiring woman. She started to play Hockey when she was in year 6 . It takes a lot of work to go to the Olympics. She is almost there. She teaches younger people to become great goal keepers.”
Hannah

“I liked the video conference. It was cool to talk to an Olympic hockey player.”
Tom

“I liked talking to Rachael Lynch about hockey. The video conference was awesome! Rachael told us about where she lived and how she got into hockey.”
Hunta

“Rachael was really entertaining. It was cool talking to a hockey player who is going to the London Olympic Games 2012. I learned a lot.”
Matthew

“I liked the video conference, it was so fun.”
Bryce

“I enjoyed talking to Rachael Lynch because she is awsome at sport. I nearly had a heart attack when she popped up on the screen in our classroom. She is a good role model for young hockey players. She is great because she won a gold medal at the Commonwealth Games.”
Matthew

“The video conference was awsome because we got to ask Rachael questions and she gave us great answers. I was nervous talking to her.”
Grace