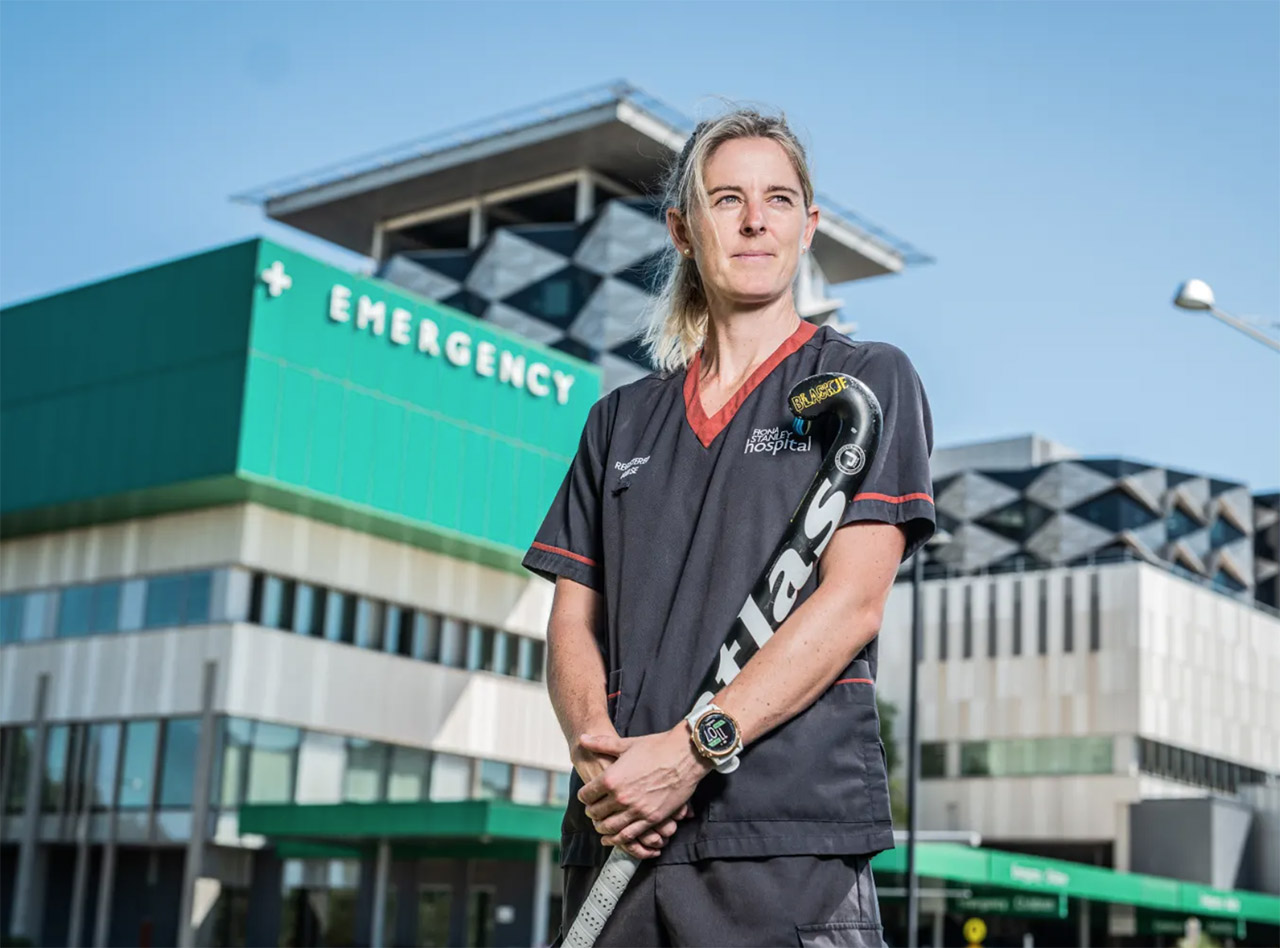 The day the 2020 Tokyo Olympics were postponed was, for many athletes, a deflating end to years of planning.

For Hockeyroos goalkeeper Rachael Lynch – it was a call she desperately wanted to be made.

"I had hoped that it would get postponed," Lynch said. "I'd been getting quite frustrated in the lead up to that, I knew that I wanted to be at the hospital and working and also distancing myself from the other hockey girls in our program."

The Hockeyroos were told on Monday morning that their program was finishing. Lynch was back in the wards at Perth's Fiona Stanley Hospital by Tuesday.

"Our focus was on the Olympics and we were still training together as a team as of Monday, and then once that finished up, it was pretty clear for me, I was straight into my boss's office trying to get some extra shifts at the hospital," Lynch said.

Each member of the squad, who are based in Perth, was given the chance to fly home to their families before the borders shut.

Instead of going back to her home town in Melbourne, Lynch stayed to help amid the health crisis.

The Olympian currently works in a neuro-rehab ward but has applied to work at the hospital's COVID-19 Assessment Centre which is currently "desperate for staff".

With a contract of just one day a week, Lynch said she is "completely free to work" now her Olympic dream has been put on pause.

"There's a lot of full-time nurses that can't put themselves forward ... I'd rather be making myself useful than sitting at home," Lynch said. "I just feel like I can help there, just because COVID is happening doesn't mean all the other illnesses have stopped so - the hospitals are busier than ever and our intensive care unit is already full."

For Lynch, suiting up to work with patients potentially infected with COVID-19 won't be much of a transition from her role with the Hockeyroos.

"I'm a goalie. So I'm used to putting all the gear on and I think the PPE [personal protective equipment] you have to wear as these front-line clinics is pretty full-on," Lynch said.

Lynch is now hoping to use her platform to encourage people to stay in full lockdown ahead of the current government advice.

The news of the Olympics postponement, she said, was a welcome "relief" for some Australian athletes, who found the coronavirus chatter a huge distraction.

"The perspective of what's going on in the world and the real-life things, you just can't connect any sort of sadness or disappointment with sport given that that is going on," Lynch said.

Lynch won a both a World Cup silver medal and Commonwealth Games gold in 2014 with the Hockeyroos and made her Olympic debut at the Rio 2016 games with the team making the quarter-finals.

As a 33-year-old, Lynch was concerned she would not get another chance at Olympic gold.

"My time is certainly coming to an end and the fear that it would either be cancelled or postponed for maybe two or more years was a bit of a worry," Lynch said. "Hearing that it's going to be in 2021, I think is a really good thing and I'm excited about that opportunity but it's really at the back of my mind at the moment."