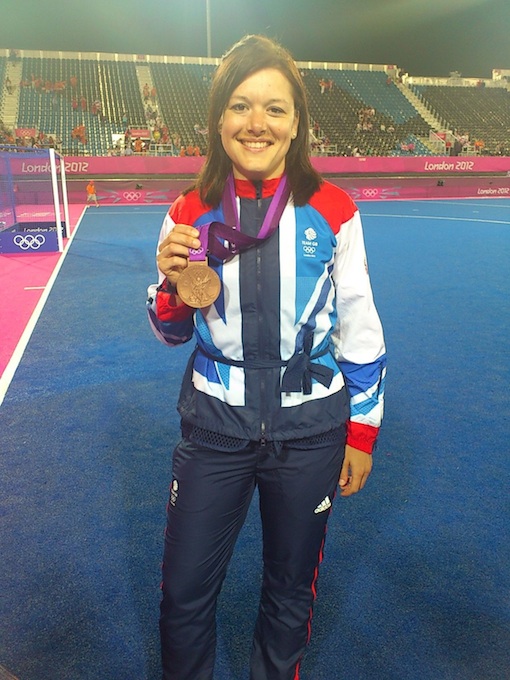 Great Britain and England goalkeeper Beth Storry was kind enough to share her experience of the London 2012 Olympics with me. Beth added an Olympic Bronze to her list of achievements and so I thought it would be great to hear about her year and how it all came together.

1) How did it feel playing in front of such a huge home crowd?

Playing in front of such a large (16,000 people) home crowd was absolutely incredible. The noise on the pitch was crazy and you couldn’t hear anything when we were attacking. It was something that was very special and something that I will remember for a long time.

2) How do you control your nerves before a big game?

I think that everyone gets nervous before a big game and what I try to do is to just think about what I’m going to do during the game; talking to my defence, concentrate on kicking technique etc. during the warm-up I concentrate on my kicking and quick feet and then once the game starts I think about talking to my defence and where the opposition is. I find that as soon as the game has started my nerves subside and then I’m so focused on the game. I think that everyone has their own technique or way of controlling nerves.

3) Talk us through the Bronze medal match

The bronze medal match was really special as we knew that whomever we were going to play it was going to be tough. We know that New Zealand has got some really quick and good forwards, so we had to limit their attacking chances. I think that all of the GB girls were so determined that we weren’t leaving the pitch without a medal! Luck seemed to be on our side though, as it was 0-0 at the start of the 2nd half and New Zealand hit the post. I think that had they scored it could have been a very different game.

4) What was it like being in the village and amongst so many amazing athletes?

The village is a really cool place and its so strange to be amongst so many different and talented athletes from so many countries. You could spend hours in the dining hall people watching. I am terrible at spotting famous athletes, so for me I was happy just saying hi to the other hockey nations and getting on with life in the village. The village was very well organised though and we were looked after so well by all of the volunteers and Team GB head quarters there.

5) Besides your medal what was the highlight of the games for you?

I think that the highlight of the games for me was playing in front of such an incredible and vocal home crowd. It is something that I don’t think we will see or experience again in the UK for a long time. The volunteers also made it – there were thousands of people who has given up hours and weeks of their free time to be there and they were always so friendly and helpful, they were truly amazing.

6) How much affect did your increase in funding have on your preparation for London?

The increase in our funding prior to London enabled every member of the squad to concentrate full-time on hockey and to be able to train 3 days a week as a squad (the other 3 days we a tended to train together as well) and to be able to live as an athlete: proper rest and recovery in between our sessions. It meant that we didn’t have to try to squash work and hockey into our days and that we could just concentrate solely on hockey.

7) How did you enjoy being a full time hockey player?

I absolutely loved being a full-time hockey player. I think it was helped by having such a great group of girls to train with and a brilliant support team. We trained with a squad of 30 girls (35 having passed through the system in total) and we all got on so well and had such good bonds within the team. There were days when you were tired or had niggles and aches, but that is elite sport and you are always pushing yourself to be better. To me going to training everyday was brilliant – I was doing something I loved and I was surrounded by my friends.

8) What happens now that the olympics are over?

Good question! The past few months have been really busy, trying to go into schools or clubs to promote hockey. I’ve been catching up with friends and family and trying to see the people that have supported me over these past few years (Obo and BMW). I’ve now got time for a holiday and I’m off to sunny Australia next week for 5 weeks to visit friends in Hobart and Melbourne, and then to travel along the Great Ocean Road from Melbourne to Adelaide. I can’t wait to go as I love Australia and a bit of winter sunshine is always nice.

9) Which team do you find the most difficult to play?

I find most if the teams within the World top 10 really difficult to play – each team has their own strengths and weaknesses.

10) Do you feel this olympics has boosted the profile of hockey in the UK?

I really hope that the Olympics has shown people what a great sport hockey can be and hopefully it has encouraged more people to give it a try and to fall in love with the game.

What’s next for me – to be honest, I’m not too sure. I’m going to have a good holiday first and then think about what’s next. I am going to be playing the 2nd half of the club season over in Holland, but I haven’t really got any further than that.