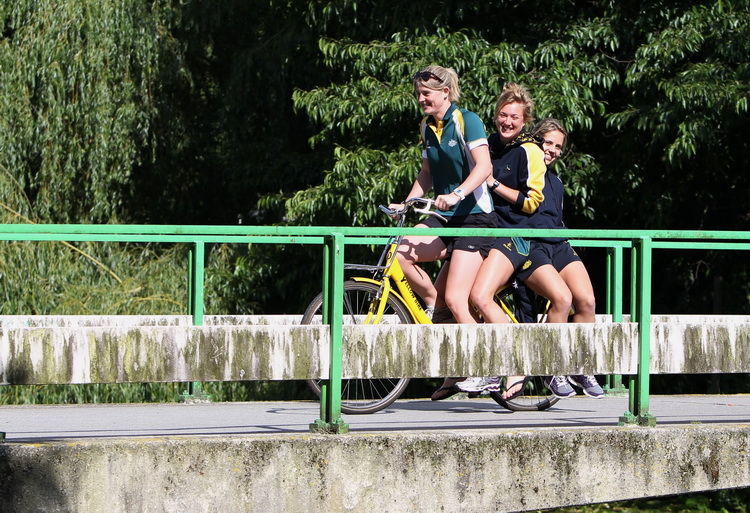 Sorry I have been really slack again. We just finished our first classification game against China and managed a 2-2 draw. It was another improved performance by the girls. We were up 2-1 at half time and you could say all over them. For a team who just love to run, we shut down there options and didnt give them the chance to do that. I was lucky enough to get another game and was pretty happy all round…..except for my little brain explosion where I stood still and watched them pass around me in a two on one. Oopsy!! There were heaps of video referrals which for those who dont know are similar to third umpire in cricket or challenges in tennis. Each team only gets one per game but if you win it then you keep your referral. They can be game changing mistakes that the umpires make so the idea is that if you disagree and the result is a corner,stroke or goal then you can refer.


Other than that all is well over here. We have had lots of fun outside of the hockey. Yesterday we all went down the street to grab some lunch and a few of us rode the four bikes that the team has hired. We have mastered the art of dinking so can efficiently transport atleast two at a time. On the way back we were feel extra lazy so Hurtzy, Ash and myself tried the 3 person dink. Picture this. Ash sitting on the back facing backwards and holding onto the metal seat, Hurtzy sitting on the seat and holding my shoulders and me riding standing up…..Clever huh!!! We managed to survive the 5 minute ride home with only sore ribs to show for it from laughing so much. Great fun! Not sure though if we will still be able to use the bikes though as today our 3rd GK lizzy had a bit of a stack. We have 2 players who are not playing at all in the tournament so they ride to the ground each day. Today Lizzy tried to jump a curb, forgetting that these bikes are not mountain bikes and do have back brakes. She fell and has badly rolled her ankle. OUch! Poor thing.

So two games to go now. We play England next so keep an eye out for the game time if you are planning on watching. Oh and if you are interested there are photos from the tournament at http://treebyimages.com.au/imagebank/flex/dot/list/treeby Just click on champions trophy 2011.