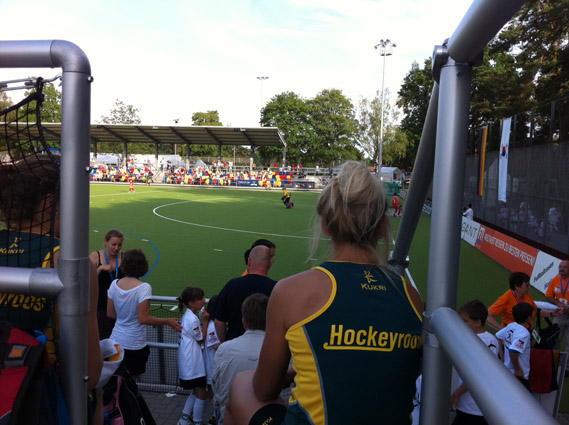 First day of games over and all teams are sitting even on 1 draw with 3 goals for and 3 against. We played the Argies yesterday and drew 3-3. It was a reasonable game and a pretty good start to the tour for us. The Argies were at full strength with the number one player in the world back after some time off and at one point we were beating them 3-1 so cant complain. One of our girls who was playing her first game scored a ripper goal after the goalie deliberately let it go in thinking it was outside the circle. Funnily enough though it wasn’t even close. Brain explosion I guess and a goalkeepers worst nightmare. I sat out yesterday and so had to watch the game through the video camera. Not nice. I was going cross eyed by the end. I did miss one of our goals so hopefully that will secure me a spot on the field next game and never filming again 😛 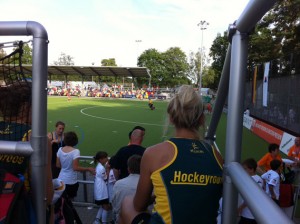 The other game, Ger v Korea was also a 3-3 draw which was pretty exciting. Goals are always great. The Koreans are playing one short now as in a practice match the other day an Argie smacked one of the girls in the jaw with her stick. Accident of course. She had multiple fractures and had to have surgery. ouch!!

Today is a rest day so not much happening but I have included a few photos for you to have a look at. Including one very unattractive one of Cronky and I where I look like a Gigantor! We got new uniform before we left and our lovely sponsor decided to give us both small goalie smocks. We are both now at risk of dislocating our shoulders every time we put them on. Eeek! The other photos are just muck around ones. More to come.