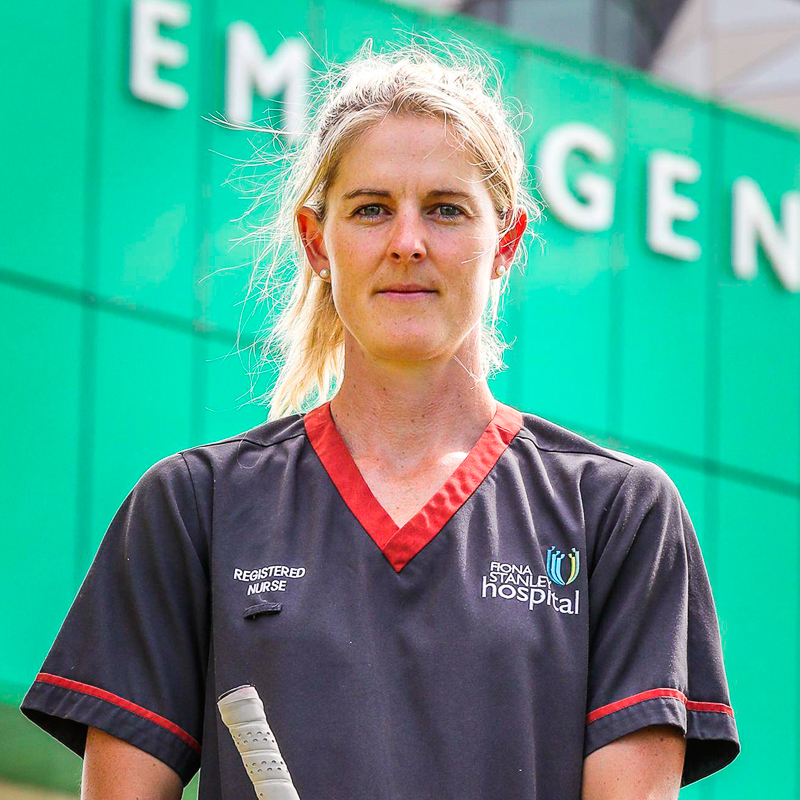 Wanting to protect and defend is just part of Rachael Lynch's make up. When she's not stopping shots on the field for the Hockeyroos, Lynch works as a nurse channelling her passions to help the nation through the COVID-19 pandemic.

For the last decade, the Rio 2016 Olympian has spent one day a week working in the Neurological Rehabilitation Ward at Fiona Stanley Hospital in Perth, assisting patients with conditions such as multiple sclerosis and stroke, but recently her focus has shifted to helping bear the load of COVID-19.

When it was announced that the Tokyo Olympics would be postponed, Lynch said she felt a sense of relief, as it gave her the opportunity to focus all of her attention on the struggle of the community at large.

"To assign too much emotion to the Olympics when there is so much devastation happening elsewhere, just wouldn't be right.

"We are athletes, we always adapt and right now there are much bigger things going on in the world," the 2019 FIH Goalkeeper of the Year said.

So incredibly proud and thankful to be named International Goalkeeper of the Year! 🌟😃🏑

As sporting clubs and facilities around the country started closing down, the national hockey squads, based at the WAIS in Perth, were given the opportunity to head home to be with their loved ones.

Melbourne is home for the 33-year-old who moved to Perth several years ago to train with the Hockeyroos, however, Lynch made the decision to stay on the other side of the country.

"We had the opportunity to go home from the program and be with our families, but when I found out Tokyo was moved to 2021, honestly, all I was thinking about was trying to get into the hospital.

"I applied to work at the COVID-19 assessment centre and increase my hours from one to three days per week."

With the announcement that Tokyo Olympics will now be in 2021 I can take comfort in that fact that right now the only place I need to be is at the hospital! I'm so proud and thankful to all the health care workers who are helping fight Covid19. #stayhomestaysafe

When asked if it was difficult being away from her family during such tumultuous times, Lynch said Perth was where she needed to be for both her family's and the community's sake.

"It was an easy decision for me to stay because I wanted to work, and I wanted to help. I knew that if I went home, I would be around my mum and my nan who are both very special to me and I wouldn't want to put them at risk," she explained.

"But here, I live by myself, it's much lower risk because I'm not exposing anyone else in my household. I've seen a lot of doctors, nurses and teachers who have had to move out of their family homes, because even if you do follow all of the precautions, it's still a risk."

Her roles both on and off the pitch are indicative of Lynch's strong desire to protect those around her. When asked if she is ever fearful for her own safety in goal or as a nurse during a pandemic, the simple answer is, no.

"I've never had too much fear and it's always been a deep desire of mine to help and do things for others.

"They're both selfless positions in that there isn't a lot of glory, but I really enjoy it and thrive on the pressure."

Lynch says that although she appreciates the support from the community, everyone can play a role in saving lives during COVID-19.

"There's been a lot of admiration for healthcare workers. There have been people giving out free food and applauding outside their houses," she said.

Special delivery this morning to the amazing staff on my ward at Fiona Stanley hospital. @cambridgecornerstore kindly donated delicious home cooked meals and there were some special treats from @florafauna_perth too! While health care staff keep working please do your bit and #stayhome

"It's obviously so wonderful, but I don't think they realise that they also have the power to save lives.

"It's that real and that simple. All you need to do is stay home, which I know goes against everything we are used to because we want to be social and connect, but it's honestly the most important thing everyone can do right now to save lives."

As an ambassador for R U OK Day, Lynch also wants to encourage the community to find purpose in each day and take care of each other.

"Despite the fact we're living in a very different situation at the moment, having a routine is really important," she explained.

"Whether it's some form of exercise, finding a new hobby or learning a new skill, it's really important to give yourself purpose each day.

"Connection is also a really key point, we really need to look after each other and we're lucky that we've got the technology to do that virtually even though we can't do it in person.

My little nephew Zaccy had his first session in the Gk pads! Great job little man. Swipe across for the full video. Training from home is the reality for us all. Just try not to put your stick in your mouth where possible 🤣 @stompgoalkeeping

"My family has a group set up, where each of us check in on my nan, just simple things like that where if everyone calls once per week, that's about ten phone calls.

"Everyone needs that connection, not just the elderly. There are people who have lost their jobs or are struggling for whatever reason, and it's about checking  in on those around you and also, reaching out and letting people know you need some support when you need someone to lean on."

Although it's a long road ahead to Tokyo in 2021, Lynch says that she is excited for the Olympic Spirit to inspire hope and unity around the globe.

"I can see why Tokyo wanted to hang onto the Olympics this year, because it is so powerful to unite people," she said.

"It is something that has so many benefits and I'm hoping that when the Olympics come around, we can reset as a community and it can help everyone get back on track.

"Sport is such a wonderful thing in that way."